Chapter 9 - What is the Mark? Wrong Question!

Main Page - leave comments below
from the book Evidence Backed End Time Prophecy at 2020sprophecy.com
And I beheld another beast coming up out of the earth. He had two horns like a lamb and he spoke like a dragon (Rev 13:11).
And he causes all, both small and great, rich and poor, free and bond, to receive a mark in their right hand or in their foreheads. And that no man might buy or sell, save he who had the mark, or the name of the beast, or the number of his name (Rev 13:16,17) 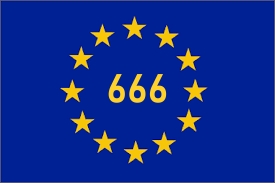 Where a crime is involved, have you ever heard of a detective asking what the crime was, but never searched for who did it? That's what's going on in the prophecy/watchman community. They're telling you the crime of the mark of the beast coming, but they're not even identifying who is actually the 2 horns of the beast of Revelation 13, the criminals involved! That’s not even an investigation taking place. How does that make any sense?
First, we must identify who the 2 horns of the beast are before we can even speculate on the mark and as I'm about to present, all the evidence leads to the 2 horns of the beast, being none other than Russia and China.
The testimony of Jonah Ben Noah gives it away. In his God given, wonder in the sky, he describes the head of a ram with 2 horns that brings death and destruction to the land. I propose that these 2 horns ARE the 2 horns of the beast of Revelation 13. Because of this, I present to you a new thought from scripture that holds weigh in a different view of Revelation 13, from what is throwing off many brethren in prophecy. Revelation 13 says the two horns of the beast are like the horns of a lamb. This leads prophecy teachers to think the horns might be from a Christian rooted nation (the US) because “like a lamb” is a Christ type metaphor, but what if it's a misunderstanding? Did you know that in ancient Israel, a lamb and a ram were synonymous? Did you know in Hebrew, a young sheep was called a lamb and an older male sheep, a ram? The only thing that separated the two was age. Even in our American language (google it) a young sheep is a lamb and an older male sheep is called a ram.
Jonah Ben Noah was shown it to be, more specifically, the head of a ram with 2 horns. The horns of a lamb ARE the horns of a ram because a ram IS a lamb! This changes the prophetic outlook. No longer can we think it has to be the US. I believe God is revealing more here and giving us further knowledge supernaturally backed by Ben Noah's testimony. 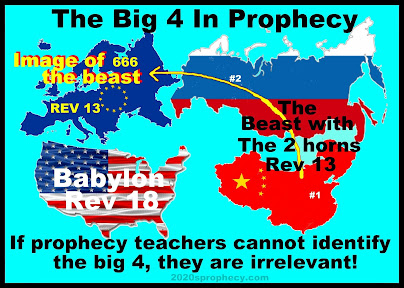 This 2 horned beast also speaks like a dragon. One of China's national emblems is the dragon. Now are you beginning to see where this is going? The voice of the beast to come will be the voice of China, the dragon. Besides Russia, China is the only other power in the earth strong enough to join with Russia to take over. No others have the military might even close to toppling the US, but Russia and China together, does! And that is the only geopolitcal reality that matches a replacement of our petro dollar system for the mark. In a common sense thinking, it merely is a matter of a process of elimination, especially in light of how the US government is hostile towards both, China & Russia.
There is also the strong evidence to weigh concerning today's present geopolitical reality. Can you see, the US beheading people for not taking the mark? Sure, you could conjure up a stretch of the imagination to think so, but it's not a reality in our present system of religious freedom. There are too many Christians in the US as well, who will not let it happen under our present system. In order for the mark to be enforced, and the mass martyrdom that goes with it, there would need to be a very radical change that takes place. That's where the WW3 prophecies bring this to light. That's the radical change that would be needed.
Our military, in over 100 countries over seas, has spent trillions and has given a ton of the blood of soldiers to defend our present petro dollar system, oil backing our currency. You see, the mark is not just a mark, but is all about control with economics. No one can “buy or sell” without the mark. That's economics! It really is the present petro dollar system vs the mark of the beast system. Modern day technology has made sure of that. When one is removed, the other will take it's place and in no way is it going to be a gentle, gradual change. There's too much at stake.
Which brings me to another point to make. If we have only a few years left for prophecy to be fulfilled before the 6000th year, the start of the millennial reign of Christ, then there's not enough time for that gradual change over to the system of the mark. Revelation 18 shows a sudden fall of our present system, not a gradual change. There's absolutely nothing given in signs, dreams or visions of any of that gradual change either, which is another major factor to consider.
The Bible also describes a radical time of change in just 3.5 years at the end of this rule of man and the book of revelation lacks no adjectives in describing the radical change that's coming soon. For that radical change to take place, the US, the policeman of the world, must in a sudden way, be taken out, and that through war. The NWO world of int'l bankers ruling in secrecy is a reality and they have the technology to bring forth the mark, but there's not enough time for it to gradually happen through our present US system.
In conclusion. We cannot try to identify the mark without first knowing who the 2 horns of the beast are, who enforces the mark. We cannot put the cart before the horse. The only possibility is Russia and China, as THE SUPERNATURALLY BACKED TESTIMONIES SHOW! The unbelief is not justified!
Much More at 2020sprophecy.com